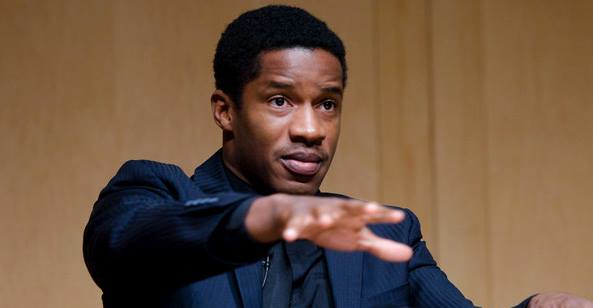 Fox Searchlight had plunked down a jaw-dropping $17.5 million for worldwide rights to the film, the biggest sale in the fest’s history…also marks the largest sum ever paid for a finished movie at any festival…

A version of this story first appeared in the Feb. 5 issue of The Hollywood Reporter magazine click here to read it there or just read on. To receive the magazine, click here to subscribe.

Just as the world-premiere Sundance Film Festival screening of The Birth of a Nation was about to end on Monday, filmmaker and star Nate Parker snuck out of the Eccles Center theater and into a side room.

“I took a couple deep breaths to just sit with my thoughts, pray a little bit,” he tells The Hollywood Reporter.

They would be the last quiet moments the actor-director would have. When he re-emerged into the theater, the frenzy began.

The Sundance audience gave the slave-rebellion drama an extended standing ovation, which was followed by mostly enthusiastic reviews. By the next morning, Fox Searchlight had plunked down a jaw-dropping $17.5 million for worldwide rights to the film, the biggest sale in the fest’s history. It also marks the largest sum ever paid for a finished movie at any festival, including Cannes, Berlin and Toronto.

For Parker, who started writing the script for the Nat Turner drama seven years ago, he knew something special was happening when he took the stage to introduce the film Monday night. In a rare Sundance moment, the audience gave him a standing ovation before a single image had played onscreen.

“It was almost like confirmation: People are ready for this movement, even more so than they are for the film. They’re with you in the spirit of what you wanted to do,” says Parker, who, as he said during the post-screening Q&A, hopes the film rallies people to be “change agents” to fight injustice in their own lives.

Birth came to Sundance with big expectations, with many major buyers seeing it as an Oscar contender, especially given the controversy surrounding the past two years of #OscarsSoWhite hashtags. Parker, 36, quit acting for two years to realize the passion project that he wrote, produced, directed and toplined. He put in $100,000 of his own money to fly around the country to talk to anyone who might want to finance it. A dozen investor groups — which included former NBA player Michael Finley and San Antonio Spurs star Tony Parker — cobbled together the film’s $10 million budget.

Many of those investors and producers were invited to a private dinner in Park City with Parker and the cast at Zoom on Sunday night, ahead of the screening. More than 85 people filled the upper-floor dining space of the restaurant, noshing on meatballs and sliders before a seated dinner. Spirits were high.

“I keep saying: We’ve won already. The movie exists, we contributed to it as a family, it belongs to us,” Parker told his cast and crew at the gathering. “Everything that comes after this is bonus.”

But before there could really be a celebration, Parker had to sell his movie. Not long after the Eccles cheering died down Monday night, he and the producers converged for the afterparty at the Chase Sapphire Lounge on Main Street. It was a bit awkward, given that WME was repping the film for sales, but Parker had left the agency as a client in favor of rival CAA before Birth was screened. So the filmmaker was flanked by CAA’s Joel Lubin, Franklin Latt and Scott Greenberg as WME’s Graham Taylor began fielding offers.

Parker was swarmed by so many fans and well-wishers at the party that he couldn’t make it three steps from the front door for more than an hour. Then, his fellow producers started coming over to him to tell him that the offers were coming in — and they were big. Soon, Parker and his team left the party to take meetings.

Taylor set a $12 million minimum bid to get in the room with Parker as well as producers Aaron L. Gilbert, Kevin Turen and Jason Michael Berman, a move that eliminated many interested players who won’t spend $12 million total at a festival. Sources say the bidders included Fox Searchlight, The Weinstein Co., Sony and Netflix. (Lionsgate and Paramount expressed interest but never bid.) Searchlight and TWC appeared to have an edge with Parker, given that both distributors have successfully released movies theatrically with black casts and subject matter — Searchlight with best picture Oscar winner 12 Years a Slave and TWC with Lee Daniels’ The Butler.

Fox Searchlight executives made their formal pitch at around 11 p.m., after which the Birth producers moved to the Marriott Summit Watch for Harvey Weinstein and David Glasser of TWC to present after midnight. Weinstein is said to have been willing to go as high as $14 million, so Taylor took that offer to the other suitors. By 5 a.m., Weinstein had bowed out when the bidding reached $15 million. Searchlight then upped the ante to $17.5 million.

For Parker, his main focus was not just the money, but finding the right fit for his film. “My responsibility to the project is to make sure to find a partner that is as passionate as we are about it socially, so if that meant we had to take less money, then those were conversations I was willing to have,” says Parker, who would not speak about specific suitors that did not submit the winning bid.

Multiple sources say there had indeed been a higher bid: Netflix offered $20 million for all rights but was insisting on a day-and-date streaming/theatrical release like it did with Beasts of No Nation last fall. At a Sundance fest that has been dominated by streamers Amazon and Netflix, such a massive offer must have been tantalizing. But sources say Parker and the producers wanted a large theatrical experience, so, similarly to the premiere, people would be rallied to action.

Parker says Searchlight was open to hearing all his ideas about how the film should be released, including his hope for it to be shown in high schools and colleges around the country. He opted for their package, then went to bed at around 6 a.m. (he had a panel in the morning) and let Taylor close the deal as the sun rose.

“It just felt like we were speaking the same language,” says Parker of Fox Searchlight. “There were sentences that were being finished on both sides, and the dialogue just flowed.”