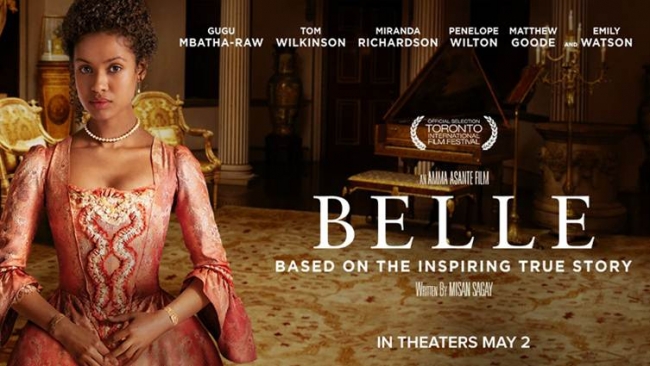 Hi Alum and 2010 winner of our Mira Nair Rising Female Filmmaker Award for her film I Remain, Tracy Grant, catches up with her brother-in-law, UK producer Damian Jones (Belle, The Iron Lady, Gridlock’d), about his career and valuable tips on getting your film made.

TG: How long did it take to make Belle?

DJ: Belle was five/six years in the making. Lynn [*his wife] had seen the portrait featured in the Antique’s Roadshow television program and it happened to be situated at Kenwood House which is right around the corner. I had simultaneously heard about the existence of this portrait with this black girl and this white girl. I started researching and tried to set it up as a film initially in the UK, but for a number of different reasons we ended up with HBO to try to make it into a feature film with them and that was the beginning of the journey.

TG: Why make this particular story?

DJ: It’s an extremely unique portrait where normally you would expect a woman of color to be painted as a servant or a slave but definitely not ever as an equal. Then there was the actual real story about this girl who was adopted into the aristocracy. The real Dido Belle was adopted by the Mansfield Family, and she was an illegitimate offspring, but because she was of their blood she became a member of the family, yet she had sort of a complex position in the household…whether or not she was part of their family… when they had guests she wasn’t allowed to dine with the family. So we deal with color and class and identity and, I hope, successfully.

DJ: First and foremost we have created a love story. I think it was something to explore because it was so “Jane Austen-esque” in it’s setting and the real story. We were able to play with Jane Austen themes, and of course the romance with this woman of color isn’t what Jane Austen is known for doing. So it ticked all of those Jane Austen boxes but it was a breath of fresh air for that genre. Of course, behind that was all of these other fascinating themes both personally with Dido Belle and the other characters, and the influence that Dido may have had on the Zong case that her adoptive father was working on, which was currently adjudicated.

TG: Was the film easy to finance?

DJ: No. Most people didn’t want to make the film. For a number of different reasons, one being the nature of the business. It was a relatively unknown director, and as talented as she was, Amma (Amma Asante) hadn’t worked for a long time. When we first started out I hadn’t made the Iron Lady, but that later became an arrow in our quiver because of the success of that film by the time we came to finance Belle. Also, because of the subject matter some people thought that period movies should be best left as traditional white characters so having a mixed race lead in a period movie was questionable as period films are inheritably expensive. Then it became who is the star, or how can we cast around the lead with a supporting cast of value, in movie making terms – “marquee names”, but the cast came because the film was unique, extraordinary and was something different. It took a while though, you know. Most people thought the challenges of the piece were too difficult to overcome. But thankfully Bankside and Pinewood Film Group as well as the BFI (British Film Academy) thought they were actually strengths to the project rather than obstacles and that is what started to turn the tide.

TG: How important is the film festival circuit?

DJ: It’s vital. For us it was not a niche movie but we needed to find its audience. We wanted to make sure we could reach women, people that respond to period movies, Downton Abby fans and also the issue-oriented cinema going “fellow” that will respond to the color, class and gender of our leading actor. But we did play a lot of film festivals, again that was for the same reason to start to build a ground swell of awareness and word of mouth.

TG: How did you start in the “business”

DJ: I got into this business as a runner, a production assistant and thought there were three jobs to have: lead actor, director or producer. I definitely couldn’t act, and I didn’t have a clue what directing was, but I was quite good at making things happen and spotting talent and being a sort of a “doer” more than a “talker”. I thought that producing would suit my natural attributes best.

I made a short film, The Candy Show. It took two years to raise the money for it, because it doesn’t matter if you’re raising 20 thousand or 20 million, it’s the same process. I really cut my teeth and developed some strides in Los Angeles, starting off making my first film Gridlock’d staring Tupac, Tim Roth and Thandie Newton. Then Welcome to Sarajevo directed by Michael Winterbottom and starring Woody Harrelson. Shortly thereafter, I moved back to the UK in 2000 and made some hopefully interesting, ground breaking films, both critically and commercially, the most well known being The Iron Lady, obviously Belle, and the UK version of Boyz in the Hood…KiDADULTHOOD, then AdULTHOOD, and a wonderful film called The History Boys amongst several others.

TG: What would you say to young producers

DJ: Don’t take “no” for an answer. Adapt to the responses to your project. Make sure you have the best-credited team as possible and that may have to change over time as the market reacts and responds to it. Make sure you are raising the right amount of money for the project, for the budget that its worth from its conception or as an idea. You need to use your initiative to get it financed. Expect everyone to say “no” BUT you only need one “yes” and build form there.

DJ: Up and coming, is a project that was just announced with Dame Maggie Smith, Lady in the Van, written by Alan Bennett and directed by Nick Hytner at the end of the year. Hopefully also Dad’s Army which is a project based on a very successful British television show, a comedy, about a bunch of frail, old men defending Britain against the Nazi invasion set in WWII. Always a mixed bag and I like to keep it varied to keep it interesting. I hope they will find an audience in the UK, internationally and state side too, very much like Belle has, which is wonderful…it’s striking a real chord there.
Belle will be available on DVD in August, 2014

This interview is by Tracy Grant, 2010 winner of the Harlem International Film Festival’s Mira Nair: Rising Female Filmmaker Award for her film “I Remain.” UK producer Damian Jones is Tracy’s brother-in-law of 25 years.

Tracy is currently working on her next project, a documentary film called “Pelo! Pelo!” Tracy and celebrity hair stylist Ona Diaz-Santin, are creating a stylish, progressive film that places the spotlight squarely on the Latina female entrepreneur and immigrant.

Dominican hair salons are big business and Pelo! Pelo! (Hair! Hair!) tells the compelling stories of diverse stylists who own, work in or manage lively salons in the United States and the Dominican Republic. Narrowed down from over fifty interviews in NY, DC, MD, GA and FL, the film traces their roots and travels to the colorful, culturally rich Dominican Republic – the backdrop of the film.

​Many of these women have traveled from what resembles in some cases, “Third World” to the “New World” in search of the American dream. What is more, in these difficult financial times, they are opening salons… not shutting them down.

Which leads to multiple questions: Why is hair styling such a popular skill set and large source of income and business ownership for so many Dominican women? How does racial identity influence technique? Who is actually financing these stores? What is the influence of Dominican salons on beauty product sales, competition and the industry as a whole? Pelo! Pelo! explores each of these questions.