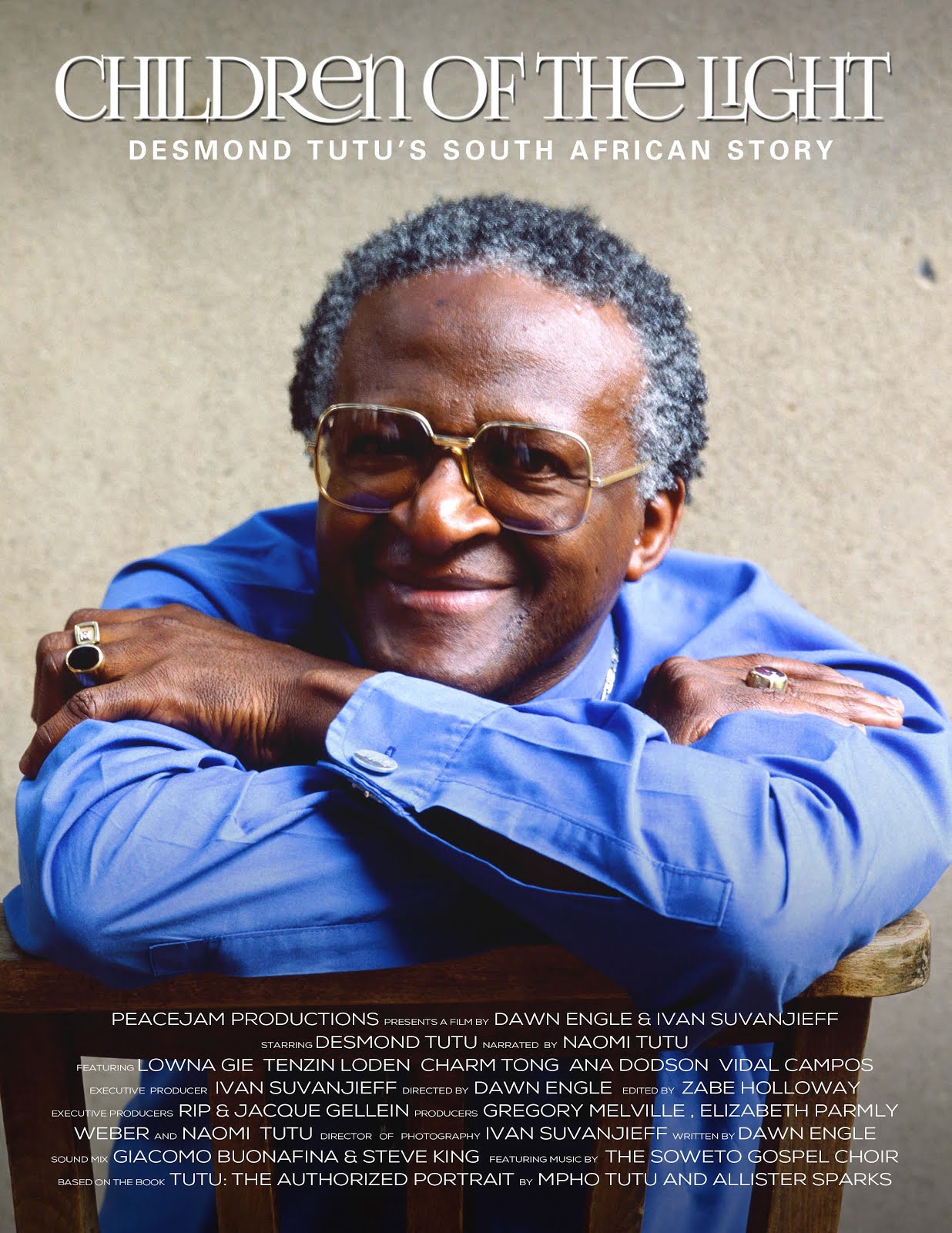 On September 10, 2014, the US Premiere of Children of the Light opened the 9th Annual Harlem International Film Festival following on the heels of its sold out World Premiere screening in Monaco.  Co-sponsored by the Columbia University School of the Arts and the Center for Palestine Studies.

At 82, Tutu is a moral icon and father of modern day South Africa who continues to fight on as a tireless advocate for justice and equality for people in every corner of the globe. “One day he is standing up against the oil sands deal in Canada; next he is calling for human rights for the people of Palestine; then he is stating that he cannot worship a homophobic god” says filmmaker Dawn Gifford Engle (read the complete article below).

Engle and co-producer Ivan Suvanjieff are the first to chronicle the life story of Desmond Tutu on the big screen and focus on the Archbishop’s key role in dismantling South African Apartheid.  Narrated by daughter Naomi Tutu, Children of the Light also takes us around the globe – from South Africa, Burma and East Timor to India and Peru – introducing us to five young activists who have been profoundly inspired by the example set by this living legend.

preceded by
A Boy, a Wall and a Donkey (4 min, Palestine)

The following article originally appeared in the Huffington Post on 6/19/2014 4:36 pm EDT

Tracing the Life of an Extraordinary Man

Desmond Tutu’s 80th birthday has come and gone. But still, he does not stop. He continues to speak out, and he continues to make headlines, all around the world. One day he is standing up against the oil sands deal in Canada; next he is calling for human rights for the people of Palestine; then he is stating that he cannot worship a homophobic god. At 82 years old, this moral icon and father of modern day South Africa continues to fight on, a tireless advocate for human rights and dignity for every single human being, no matter who they are.

I am writing this on an airplane, as I fly home after spending six incredible days with this very special man. I watched Desmond Tutu being honored by royalty, becoming a Knight for the second time in his life. I watched him as he hugged and held hands with patients at an HIV/AIDS center, offering them warmth and hope. I watched him being celebrated by the international media as he stood on the Red Carpet at a Monte Carlo Film Festival with a Prince. I watched him spend joyful hours working side by side with young people who are trying to become real agents of change in their own country.

And I sat next to him as he laughed, and fought back tears, as he watched his life story being told for the very first time on film. When the entire crowd of 800 rose in a thunderous standing ovation as a testament to his greatness and the life that he has lived, he sat quietly, looking down. And then he said, “OK, that’s enough,” humbled by it all.

He started each day deep in prayer. He stopped me at key moments every single day, to pray once again. He stayed up late every night finishing the first six chapters of yet another book about God, faith and inspiration. He had hot chocolate with his fruit and cereal for breakfast every morning. And he was radiant, full of laughter and joy, a true blessing to everyone who encountered him along the way.

How has he been able to achieve so much in one lifetime? The words that come to mind are tenacity, courage, faith, patience and community. He stays on the path of nonviolence and he just keeps on walking his own talk.

Desmond Tutu has been a part of my life for 20 years now — as a mentor and a role model; as a member of our non-profit’s board; as the priest who married me and my husband; as the man who always challenges me to give the very best that I have to give. It has been an incredible honor to be able to capture his spirit, essence, and cutting edge work in the world in our new film, “Children of the Light.” I hope that millions of people around the world will now be able to get to know this great man, as a result.

As Father’s Day was recently celebrated around the world, I want to pay tribute to Father Desmond Tutu, and to offer him my most profound thanks for showing me what a life well lived truly looks like.

A Message From Our Founders

Sorry, the comment form is closed at this time.